We should say a clear NO to the extraction of petrol and natural gas that will not help to the nature and the people of the island at all!

Baraka Cultural Center and Independence Path, that organized in the north of Cyprus, had made a statement about oil and gas: 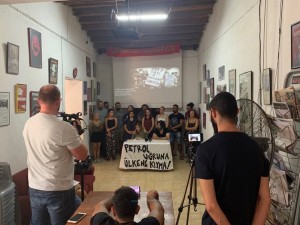 We should say a clear NO to the extraction of petrol and natural gas that will not help to the nature and the people of the island at all!

The steps of a new ecological crisis are being taken in our country and throughout the Mediterranean for the continuity of the ongoing system of lies and plunder.The petrol and natural gas drilling activities which are the most important issue of the imperialists’ political finances and the commercial incomes of the giant energy companies, continue to endanger the peace from time to time.While all around of us is getting dirty with petrol by the clash of interest, no one thinks of the real interest of the people of the island, the future of the Mediterranean and our planet.Regardless of right-leftist, environmentalist-developmentalist, ecologist-capitalist, everyone seems convinced that petrol and gas are ‘wealth’ and ‘need’.The fact that energy companies do not prefer a tense atmosphere in the geography they will invest in and that the states fund the capital, create the belief that ‘peace’ will be risked while taking the petrol to surface.In fact, with that ‘wealth’ (which will come from petrol), plans are being made to cover the cost of the solution (especially the cost of property) which the majority of our people are longing.We; nature lovers, want to live in peace and tranquility of an island where all peoples are brothers and sisters. While we are not standing up against them, both the Republic of Cyprus and Turkey’s government is continuing their drilling by a mutual challenge.

However, we know very well from the Middle East that there is no human prosperity and the peace of the peoples when it comes to petrol, but wars and ethnic/religious conflicts escalate and terror and armament increase.The natural resources in the hands of capital have brought oppression to the peoples while providing wealth to only a very small class.Peace and brotherhood and sisterhood of the people in Cyprus cannot be built with petrol, but with an ecology-oriented order that is compatible with nature.

Apart from the risk of ‘accidents’ that affect the lives of thousands of people that have turned the Gulf of Mexico into a dead sea for years, deep-sea drillings have been damaging the sensitive Mediterranean ecosystem.The catastrophe, which recently resulted in the death of 11 people in the US-owned drilling rig owned by a world-class petrol company, did not only affect the lives of people, but also infiltrated the sea for 3 months, the ecosystem of the Gulf of Mexico and negatively affected lives of the animals such as whales, sea turtles and migratory birds.There is no guarantee that such a disaster will not occur in the Mediterranean and that the lives of the islanders and our ecosystem will not be adversely affected.

The filth left by the American company CMC in Lefke region between 1912 and 1974 has been causing environmental problems, pollution of sea and ground waters, cancer and various diseases for 45 years. When petrol is discovered and operated, the result will unfortunately be similar.

Above all, if mankind wants to exist on this planet and is thinking of future generations, fossil fuels that arethe most important cause of climate change, air and water pollution and ecological destruction must now be completely abandoned.New wells and resources should not be opened at all. Renewable energy sources should be used as a continuous choice.Almost all of the capitalist states had to accept this scientific truth, and international law was created in this respect by the Paris Agreement.However, states that do not obey their own rules are only maximizing the profits of companies.Because the existing system of exploitation has no choice but to grow.Saying a clear no to petrol extraction in our island – no matter which company or state it is in – also includes an anticapitalist attitude and opens the door to a new way of life for us.

The defense that energy is an inevitable ‘need’ also comes up with the question of ‘who needs’ it.Unless the people / producers decide what to produce for how long and for what, we’re not talking about real needs but a consumption frenzy inflated by the advertising market.In an era of cultural degeneration and alienation at the peaks and worship of commodities, everything is produced in excess to satisfy the hungry eyes of the market and impudence is imposed as a way of life.

We urge our environmentally sensitive people, who shouted that they did not want apetrol filling facility on the shores of our island a few years ago, who organized actions from the east to the west, who asked the account of the pollution created by AKSA, and who made meaningful contributions by planting trees and collecting garbage to say ‘stop’ to the petroleum and gas exploration works.

We invite all officials, particularly the President and the Ministries of Foreign Affairs and Environment, to think ecologically, people-oriented, and not to allow petrol and natural gas to be searched in our seas.

We invite environmental friends and nature lovers living in the south of our island to raise their voices against their governmentsand to fight together to end the search for petrol and natural gas.